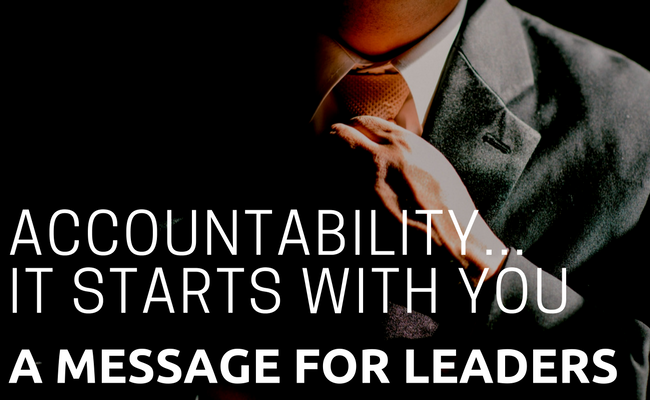 Picture this: you’re now the executive producer of a movie, and your workplace is a movie set.

Every day you have a cast and crew show up. Their job is to create a “blockbuster”–a smash hit—so you have more customers, greater profitability, and increased success.

As leaders, I’m sure you’ve heard all the excuses in the world from “dead wood employees” who don’t seem to be taking responsibility or holding themselves accountable for the end result.

What if I told you that rather than lacking accountability, these employees are really just confused about exactly what it is that they are supposed to be doing?

If your employees don’t know what they’re supposed to be doing, it’s because your leadership accountability could use some work. Click To Tweet

If your employees don’t know what they’re supposed to be doing, it’s because your leadership accountability could use some work.

There are some other underlying factors that can manifest as what you perceive to be “dead wood employees.” I’ve written more about how to determine if someone is in fact a dead wood employee, or if you—as their leader—can do more to inspire them. You’ll find that here.

As a leader, it’s your responsibility to be communicating exactly what is supposed to be done.

Part of mastering leadership accountability also involves making sure your employees know exactly where their responsibilities start and where they end.

What do I mean by “accountability extremes”?

Well, on the one hand, you’ve got employees who take absolutely no ownership, no responsibility, get nothing done, and blame everybody else.

On the other hand, you’ve got employees who can’t help themselves–they have to take responsibility for everything–even other people’s work when it has nothing to do with them!

I once had a sales rep named Jeff. He was an outstanding producer who handed his sales reports to our administrators in an efficient and timely manner.

But he couldn’t help himself–he kept on interfering with their system!

He wanted to manage the entire process, and as a result, he ended up frustrating everybody, including himself.

That’s why it’s worthwhile remembering that in some instances, team members may not realize where their accountability starts and ends.

As a leader, it’s your responsibility to communicate the desired end result.

You will be a more effective leader when you can communicate to your team exactly what it is that they are supposed to be doing, no matter how successful or unsuccessful they may ultimately be!

With that being said, even the mention of accountability can make the hairs on the back of the neck stand up for some leaders.

Why is it so difficult for leaders to discuss accountability?

This is often due to the manner in which the leader delivers the message and the way their employee receives it.

If the leader’s tone, whether intented or not, is negative, all too often they’ll get a negative response in return.

If you can utilize positive communication more frequently, team members are able to recognize their overall contribution to the “big picture”, as well as to the team.

As a result, they also feel more empowered and in control of what they need to get done.

Ultimately they have success because you have demonstrated trust in their ability to get the work done.

These conversations are also better had once you’ve developed a leadership mindset. How do you do that? Visit this post to find out.

It starts with how you see the world and how you translate your reality to your team!

Would you like more help with leadership accountability? Have a look at my consulting and coaching services here

To learn more about increasing accountability in the workplace, you can also WATCH and subscribe to Michelle’s brand new Leadership Insights TV Series!

Did you enjoy this article? Be sure to visit these posts too:

Passionate Leaders: 12 Key Traits that Distinguish the Best from the Rest
How to Improve Team Engagement: A Leadership Challenge
Why is Courage an Important Trait of Great Leaders?

This article was originally published on December 8, 2017, and has been updated.